Directed by: Aneil Karia Created by: Aneil Karia & Kano The charity INQUEST report that since 1990 there have been at least 100 deaths of people who are racialized as black in or following police contact in the UK since 1990* This data is based on monitoring and casework since 1989 when INQUEST began, as well as official reports since they began to be published. [*This number does not include people who died following police pursuit or in road traffic incidents, and excludes four men who were fatally shot during acts of terrorism.] All profits generated from the views of this video will be donated to INQUEST. https://www.inquest.org.uk/ | @INQUEST_ORG To further support independent family campaigns: https://www.inquest.org.uk/family-cam... 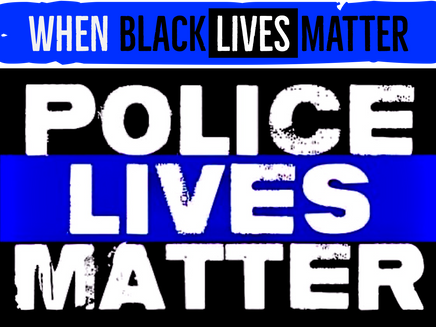 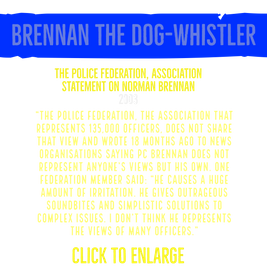 Black British Citizens will not be supressed, oppressed or defeated by brutal, bigoted, bias, racist police officers, ex-cops, retired cops who don't represents the views of majority of the 123,000+ officers serving across departments in the UK police service.

Retired officers such as Norman Brennan are an embarrassment to the good serving officers currently serving, who wish not want to be tarnished with Brennan’s rhetoric. Rent a mouth Brennan has longed made a living out of giving biased and stereotyped opinions of black British citizens, still feeding off a long past career in the police force and who now spends his retirement hours on social media’s spitting bile and harassing high profile and respected black citizens while vilifying black teens and the black community in an attempt to shut down black voices of the BLM movement, he regularly incites hate in his endeavour to cause harm and further deepen the division between serving police, police service and the black community. Black Lives Matter.

Term used in the USA and UK

The "thin blue line" is know as a term police use to assert a line which keeps society from descending into violent chaos. Colloquially, the term also refers to the idea of a code of silence among police officers used to cover up polcie misconduct. The code of silence follows being branded as a traitor or an outcast within the unit or service ans wojld fronw on whitle blowers.

You may have noticed police, particulary on social meda platformes using the thin blue line on media profiles as a form of solidarity and unity. You will also see ex-police, retired officers having an agenda to discredit black lives matter to its followers. This often incites hate for black people, hate for black youth and continue to use the label 'black on black crime' to segreagate crime into groups rather than it's a crime. White on white crime of course occurs every second of the day but not discribe in the same way the police still hang on to the label black on black crime.

The police service and the black community are as polarised today as it was in past decadses maybe more so in many ways.

Over 20 years have elapsed since the Macpherson report, which found that the Metropolitan Police was institutionally racist. Despite claims in July 2019 by Cressida Dick, the Commissioner of the Metropolitan Police Service, that her force is no longer institutionally racist, the evidence suggests otherwise. Action is urgently needed to eradicate the violence and discrimination committed by our police forces against black and other minority communities across the UK. Nobody should be subjected to excessive force (especially because of the colour of their skin) at the hands of the police, the very institution that is there to protect and serve.

Police violence and discrimination in the UK

First weeked of June 2020, thousands of people marched of al colours, ethniccites and nationalitesm young and older in cities across the UK came out in solidarity with protesters in the United States, this was following the death of George Floyd. Floyd, who was killed after being arrested by police outside a shop in Minneapolis, Minnesota.

There were been peaceful protests accross UK in recognition of similar types of mistreatment of black and other minorities, at the hands of the police in the UK.

The haunting video of George Floyd’s killing touched billions accross the globe and woke the world up to racial injustice often hardly spoken about before, the outcry and response that it provoked provides a period to reflect on the situation right in the UK.

According to Government data, a black person in London is four times more likely to have force used against them by a Metropolitan police officer than their white counterpart. In addition, stop and search powers are disproportionately used against black people:

Black people are 4 times more likely to be stopped by the police. The campaign organisation, Liberty, revealed on 24 May 2020 that Black, Asian and minority ethnic people (“BAME”) in England are 54% more likely to be fined under coronavirus rules than white people. During the period of lockdown, there have been several disturbing examples of police violence and discrimination against black and minority communities (see here, here, here, and here). Research carried out between 2010-2019 by INQUEST, a charity providing expertise on state related deaths and their investigation, reveals that the proportion of BAME deaths in custody where use of force or restraint is a feature, is over two times greater than it is in other deaths in custody.

The UK has a history of deaths caused by excessive force used in police restraint. The deaths of Darren Cumberbatch, Edson Da Costa and Rashan Charles are just a few examples. Sean Rigg, a 40-year old black man, experiencing a mental health crisis, died in 21 August 2008 at the entrance of Brixton police station in London. Evidence suggested that Sean was held face down lying on the floor for an excessive period, with one or more officers placing weight on his upper body. Rather than being driven to the hospital, Sean was taken to the Brixton police station in a police van where he was abandoned in caged area and left unresponsive. An inquest into Sean’s death in 2012 found his restraint “unnecessary” and “unsuitable”, but all subsequent gross misconduct charges against the officers involved were dropped.

Nuno Cardoso (whose family were represented by Saunders Law) was only 25 years old, and was studying law at Ruskin College, when he died in the custody of the police in November 2017. The inquest into his death took place in July 2019. It explored the question of why officers decided to prioritise taking Nuno to the police station, which was a 20 minute drive away, rather than to the A&E department that was only 5 – 6 minutes away. The jury’s conclusion, and the officers’ evidence, is difficult to reconcile with the footage of his arrest. His family’s statement about Nuno’s treatment and the inquest conclusion can be found here.

A public inquiry which investigated the death of Azelle Rodney, a man who was shot dead by a Specialist Firearms Officer of the Metropolitan Police on 30 April 2005, found in 2013 that the officer  who fired the shots which killed Rodney had "no lawful justification" for doing so. The case was referred to the Crown Prosecution Service, and the decision was made to charge the officer with murder. The officer was however acquitted on 3 July 2015.

At the time of writing, there have been 1,741 deaths in police custody or otherwise following contact with the police in England and Wales since 1990 and BAME people have been shown to die disproportionately as a result of the use of force or restraint by the police. There have however been no criminal convictions in connection with any of these deaths. In January 2019, it was revealed that only five police officers in England and Wales were dismissed in the last three years following misconduct cases ordered by the IOPC, the police watchdog.

Over 20 years have elapsed since the Macpherson report, which found that the Metropolitan Police was institutionally racist. Despite claims in July 2019 by Cressida Dick, the Commissioner of the Metropolitan Police Service, that her force is no longer institutionally racist, the evidence suggests otherwise. Action is urgently needed to eradicate the violence and discrimination committed by our police forces against black and other minority communities across the UK. Nobody should be subjected to excessive force (especially because of the colour of their skin) at the hands of the police, the very institution that is there to protect and serve.  The solicitors at Saunders Law want to see an end to negative racial profiling and stereotyping and the use of excessive disproportionate force by the police.

Saunders Law represents the family of Kevin Clarke, a 35-year-old black man, who was experiencing a mental health crisis, and died in 2018 after being restrained by nine Metropolitan Police officers in Lewisham, South East London. The conduct of the officers involved in Kevin’s restraint was investigated by the Independent Office for Police Conduct (IOPC). An inquest into the death of Kevin Clarke was scheduled to take place in September 2020 but will likely take place in the new year due to the Covid-19 pandemic. 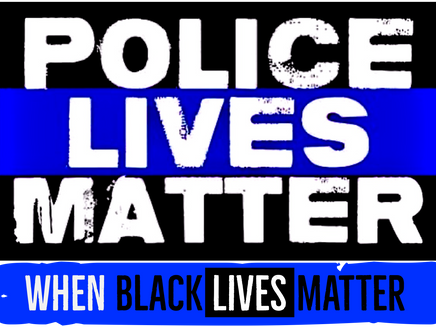 Report of an inquiry by Sir William Macpherson.

In his final report, published in February 1999, Macpherson would go on to label the police response to the teenager’s killing “institutionally racist”.

STILL NO ADMISSON - STILL NO RESOLUTION

HOW CAN WE MOVE FORWARD WHILE AN ABUSIVE POLICE SYSTEM FAILS TO TAKE RESPONSIBILITY AND REMAINS IN DENIAL?

The first and hardest part of changing is admitting behaviour, biases and unfair conduct, culture of institutions and wrongs in systems. It’s very important to take responsibility for the problem and take immediate steps to end it. The police service are yet to take the first step to get on the right track to heal and mend, to renew a relationship and then build trust with and amongst black citizens. Only when the first step is taken can they effect swift change and for the black community to truly build trust in its police service. When the protector is no longer viewed as the abusers of black bodies is when we have affected the change we need. We can make as start. Take the first step.

Stop over policing of black communites

Stop the use of exccessive force on black bodies

Stop disproportionate use of tasers on black men