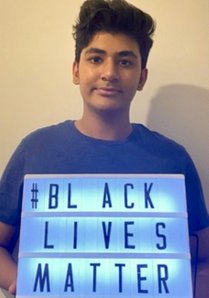 A Teen in a Majority-White Town

Qais Hussain is a 16-year-old GCSE student and Labour Party youth officer from Shipley, West Yorkshire. Here, he writes about his experience supporting the Black Lives Matter movement as a teen in a small town with a majority-white population...

He believes it's an important issue and wanted to share it with you.

Qais lives in town where there's been a significant amount of Anti-Black lives matter support among young people, and he believes this issue needs looking into. He has written an article where he clearly explains why there is ignorance among a lot of young people he knows and believes “this is probably because we live in a rural area - but there is more to it than that.”

If you would like to contribute to this platform to tell a story, a poem, have something to say please contact us and let us know!

TELL US BY CLICKING BUTTON BELOW