on a slave ship in the Middle Passage, Atlantic Ocean

Known for influence over abolitionists, his published correspondence

Charles Ignatius Sancho was a British writer and composer. He is the first known Briton of African heritage to have voted in an 18th-century general election. Wikipedia

Ignatius Sancho (c. 1729 – 14 December 1780) was a composer, actor, and writer. He is the first known Black Briton to vote in a British election. He gained fame in his time as "the extraordinary Negro", and to eighteenth-century British abolitionists he became a symbol of the humanity of Africans and immorality of the slave trade. The Letters of the Late Ignatius Sancho, an African, edited and published two years after his death, is one of the earliest accounts of African slavery written in English by a former slave of Spanish and English families.

Ignatius Sancho was born on a slave ship in 1729; his precise birthplace is thus unknown. After his mother died in the Spanish colony of New Granada and his father committed suicide rather than to live as a slave, Sancho was taken to England. From 1731 to 1749, he worked for three maiden sisters in Greenwich. John Montagu, 2nd Duke of Montagu (of the first creation) (1690–1749), impressed by Sancho's intellect, frankness, and his amiability, not only encouraged him to read, but also lent him books from his personal library at Blackheath. Sancho's informal education made his lack of freedom in Greenwich unbearable, and he ran away to the Montagus in 1749. For two years until her death in 1751, Sancho worked as the butler for Mary Montagu (née Churchill), Duchess of Montagu, where he flourished by immersing himself in music, poetry, reading, and writing (Ellis 1996:96) (Walvin in King 1997:96) At her death in 1751 he received an annuity of £30 and a year's salary, which he quickly squandered.

During the 1760s Sancho married a West Indian woman, Ann Osborne. He became a devoted husband and father. They had seven children: Around the time of the birth of their third child, Sancho became a valet to the George Montagu, 1st Duke of Montagu of the second creation, son-in-law of his earlier patron. He remained there until 1773. In 1768 Thomas Gainsborough painted a portrait of Sancho at the same time as the Duchess of Montagu sat for her portrait by the artist. By the late 1760s Sancho had already become accomplished and was considered by many to be a man of refinement. In 1766, at the height of the debate about slavery, Sancho wrote to Laurence Sterne encouraging the famous writer to use his pen to lobby for the abolition of the slave trade. Wikipedia 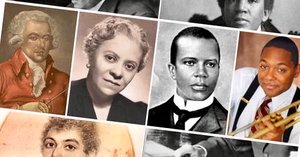 The music of these brilliant composers has too long been neglected in Western classical music tradition.

It took the shocking and tragic death of African American man George Floyd at the hands of police for the world to wake up, the murder in broad day light of a black man in 2020 has sparked a worldwide uprising against racial inequality, and protests calling for the unfailing protection of black lives from police and system brutality.

The music industry and wider communities took a stand on Tuesday 2 June 2020 with Blackout Tuesday – a vow to silence an industry long propped up by black history and culture took place on social media and across airwaves for a day, a time to pause and reflect, a time taken to plan effective, to unite for real change in the fight to end discrimination on grounds of race.

There are brilliant classical composers that have too long been neglected in the Western tradition, and here we profile and celebrate some of the most famous and influential black composers in classical music history. Black lives matter now, and absolutely always will matter.