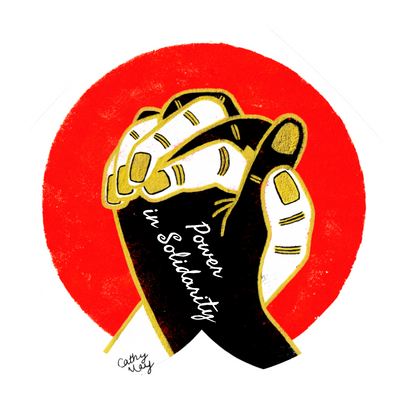 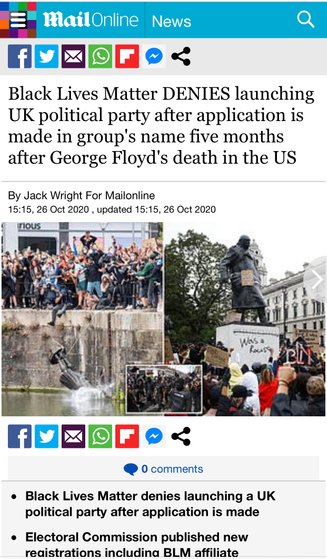 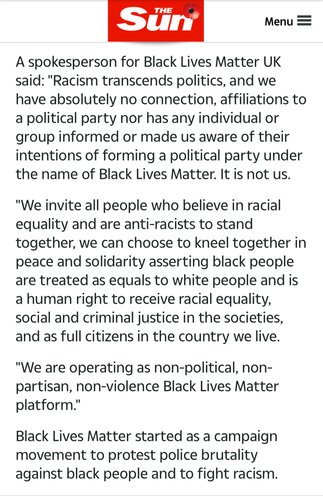 We are NOT operating as a member of nor connected with any political party in the UK or other land.

We have NOT registered with the UK electoral commission to form as a political party under the name of Black Lives Matter or any other title.

Disclaimer: We are NEITHER associated or affiliated with a gofundme account created and manage by @ukblm or any business, which is @ukblm recently registered as Black Liberation Movement UK Limited. FCA (Reg No. 8473) UK Registered Community Benefit Society.

@ukblm Quote"A coalition of people from across the UK". Renamed Black Liberation Movement in Sep 202 state they are a political group associated and affiliated with BLM USA.

THIS PLATFORM IS NOT ASSOCIATED OR AFFLIATED TO THE BLM COALITION GROUP USING: Twitter:@ukblm or Instagram:blmuk *We DO NOT have gofundme page. They do.

For information about coalition and or on BLM protest you need to contact directly or independent BLM groups to area.

In the face of racism and intolerance directed at any and all minorities we urge you as a collective to reject silence as no longer an option.

Express and demonstrate your determination to eradicate racism by stretching out your hand in unity and friendship to lift up another to your level, reject division and hate in return for our common cause and desire for peace, equality and harmony.

This here is primarily a British Black Lives Matter platform, though contributor’s, contents, material, news resources contained is sourced and submitted by people with a voice from across the globe in support of the Black Lives Matter Movement and cause.

We receive much correspondence for white as well as black citizen worldwide committed to fighting and seeing the eradication of racism from our lives. From the UK, we also receive many concerns from our white British citizens who are sometimes racist, angry, upset, and confused that the Black Lives UK Movement alienates them as white citizens and feel under threat. The movement is about righting the wrongs of racial discrimination as well as social and criminal injustices. And it will take us all to make this happen, Black, White, Brown citizen, we must all to stand together and be clear there is no room for racists or racism in Britain.

We must stand together in solidarity demanding equal rights, racial equality, social and criminal justice.

We, the British people must show we are anti-racist, we must demonstrate by action we do not stand for racism. We must express and through determination eradicate racism from our shores along with all forms of discrimination that scar and divides us and humanity.

White people must acknowledge racism exist and not push back in fear, blind ignorance, hate or to retain white privileges over black disadvantages, but progressively push forward and embrace our differences as a positive that enhances our lives, relationships society, the world.

Many of us during 2020 would have become aware anti-black racists, anti-Muslim, islamophobia, anti-Semites, xenophobia, homophobia and transphobia has risen, for many this is and has been an everyday existence, but for many through a series of events and incidents it will be a first full force shocking exposure or racism having never witnessed or been touched by such discrimination and trauma, never having to experience any or all of the above forms of discrimination because of the colour of white skin or expected sexual persuasion, some people will have been horrified and some will still be in denial that 'racism' exist, always a way out to retain white domination, benefits and hate for others that don't look like them.

Black lives matter movement has gained momentum is its fight for racial, social and criminal justice, none more so than this year, 2020, particularly since the horrific George Floyd murder taking place before the worlds eyes yet still we come up against anti-black, anti-Muslim, islamophobia, anti-Semites, xenophobia, homophobia and transphobia who’s aim and goal is to derail the traction, discredit the black lives matter movement and to incite hate and division for other groups to prevent us from becoming an harmonious and equal world, these dividers are using racial hate in the attempt that our energy will evaporate and we will all soon disappear only to settle back into line so that white domination may carry on from where it left off.

In a progressive and civilised society we must not let this happen; it benefits no one but the racist minority who believe they have the right to dominate and remain in power over black and brown citizens.

Systemic racism has always caused pain, trauma and untold stress, right across the world. Racism and racial inequality continues to be highlighted, past and present with police brutality in America and the UK. The UK need to address its current unfair racial profiling and disproportionate stop and search, harsher sentencing and disproportionate incarceration of black boys and men. USA is not alone when looking in the mirror to what’s being reflected back and it is far from pretty. UK needs to look at its reflection too.

Along with growing anti-black racism we are seeing a rise in anti-Jewish attacks promoted through online social media platforms, all in an attempt to raise distrust between groups to breed hatred and create division.

Black people and 'minorities 'as they likie to call us from all backgrounds and faiths have struggled and long suffered in days gone by and it continues today, in modern times.  From transatlantic slave trade to the Holocaust and beyond, we are hurting, we are in pain, a painful history, as a human race they are our shared collective memories.

We, the British people come in all shades as we do in shapes, and we claim our rights to be British, born or nationalised, first, second, third generation or indigenous.

Britain and what it is to be British has evolved, developed from what was once a long a time ago, when an all but white populated kingdom. Black people and others have since built up Britain are we need to recognise this by coming together, uniting to amplify our voices that we echo as one, spreading across the nation, to speak out and stand together in solidarity. Silence is not an option. White silence is no longer an option. We need to speak out if we want to eradicate racism from our shores. Those who are discriminated, who are the categorised 'minorities' cannot do it alone. Black, brown, Jewish people cannot do it alone without the solidarity and power of the White majority to stand right alongside to shout out against racism and all form of discrimination.

Black lives matter is a global movement and is here in Britain to lift up black lives, all lives, irrespective of race, religion, sexuality and gender we stand in solidarity against all forms of discrimination. We are all connected. We are of one race one, the human race.

Through YOU, your community, empathy, humanity we must stand together, sit together at the dame table, and when e do this WE CAN wipe out racism together - so we may  all enjoy the life we have on earth and for our children and future generations can too, so let leave a legacy they can be proud of. Together.

Let’s do this, let's do this this together!